“Several of the Tropical Dance Sextet band have contracted Covid-19 and we regretfully must cancel this concert that was scheduled for Tuesday 28th June. This is one of the risks all providers of entertainment services face in these uncertain times.

We have already locked in a wonderful program for our next concert on Tuesday 26 July starring Sydney-based clarinettist, Paul Furniss, to present Winter in Paris, inspired by the magic of Sidney Bechet.

Details of this program can be found here

If you have tickets for this event on Tuesday June 28th ...

If you cannot attend and wish to request a refund: 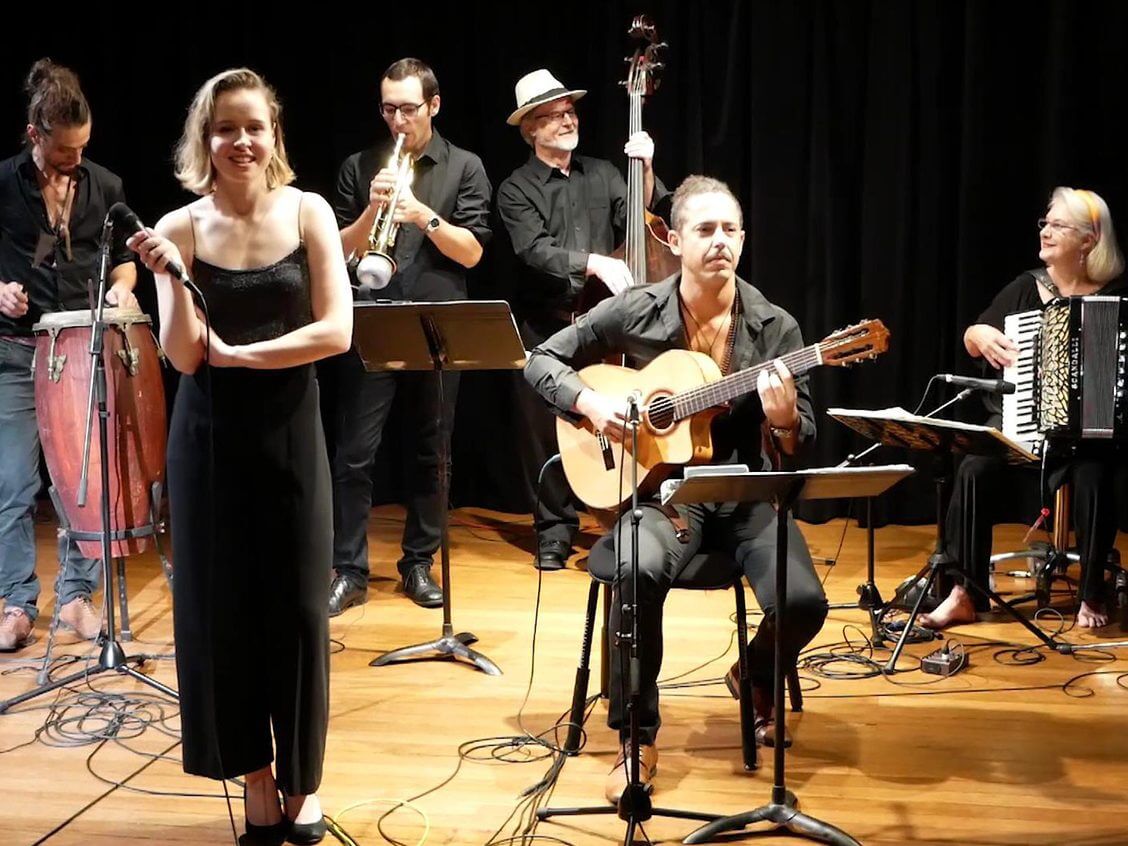 Having performed recently to sell-out crowds at the Brisbane Jazz Club and the Jazz Sessions at Forest Glen, the Tropical Dance Sextet will present their Rome to Rio show with some of the most popular and appealing songs by artists such as ...

Eddie Gazani, born in Rio de janeiro, spent much of his youth in Italy. A fine guitarist, singer, recording artist, composer and writer, Eddie is a master of the Brazilian/Italian musical cross-genre.

Kay Sullivan, plays an Italian Scandalli accordion and shows her sophisticated empathy with Brazilian and European popular music refined through many performances in choro, forró, bossa-nova and jazz manouche styles. For many years Kay was one half of Ewan MacKenzie’s Paris Dreaming duo playing gypsy jazz in the Django Reinhardt style.

Grace Rigby has a natural talent for singing in Latin styles. Her polished vocals are a result of her totally occupying a song; acting it out as well as delivering a very special vocal performance. She also sings with the UQ BIG BAND and recently with the Braben Jenner Hot Five.

Italian-born Roberto Fontana really makes his trumpet speak with his mellifluous, well-crafted sound and exciting solos, making it easy to understand why Roberto is such an in-demand performer in Brisbane and South-East Queensland.

Double-bass player and musical arranger, Peter Freeman, has played with many of Australia's top jazz musicians in bands including the Caxton Street Jazz Band, Ewan MacKenzie's Swing Manouche, the Vintage Jazz and Blues Band, and the Braben Jenner Hot Five.

Enjoy the sounds of Italy and Brazil in an afternoon of wonderful music played by the Tropical Dance Sextet at The Majestic Theatre, Pomona.

Enjoy the sounds of Italy and Brazil in an afternoon of wonderful music played by the Tropical Dance Sextet at The Majestic Theatre, Pomona

The Majestic Theatre has a choice of seating. There is now a seating plan with our new ticketing platform.

If you have a group of 8, you can book the whole table but you also need to pay for all 8 seats. If you need several more you can book them from some of the Unallocated Seats on the ground floor.

If you wish to be seated with certain people, please contact them and ask them to book on the same table that you choose.